Art, technology and society at the core values of the electronic arts festival, over the years, a wide range of topics covered, for example, in 1992 the theme of “inner world” (world from within) to explore the possibilities of nanotechnology under the perspective of the arts and social sciences, in 2008 the theme “the new cultural economy “(a new cultrual economy) is a new cultural industry to explore the Internet age, the 2011 theme of” origin “to explore the origin of all things by means of basic science and so on. Festival every spring that year announced the theme of the curatorial discourse and visual design. This year’s theme is “C … what it takes to change”, a large letter C, slightly hippie middle American slang “what it takes”, and trailing infinitive (to change) to the festival rich space, giving a bold reform potential. Visual design uses a dome, Yiyu incubators nurture intended. At a news conference, planning director Stoker (Gerfied Stocker) explains: C brunt of a “change” word, followed by a variety of synergistic complex concept group, such as joint development, cooperative economics, etc., then C can also be the catalyst (Catalyst) catalyst role arts and culture play in society. Thus this theme curatorial discourse which cites a lot of letters beginning with the letter C, covering the following are some prefix is C words: creativity, community, communication, content, public, competition, chaos, culture, cooperation, cross, cross discipline, ability, capital, thirst, cautious, certainty, confidence, challenge, choice, citizen, clouds, crowds, clusters, code, coexistence, cohesion, cynical, noise, commitment, compromise, coordination, copyright, crazy, criticism cyberspace, online art …… it is worth mentioning that there is also a Chinese word, and this is a country where the word only, and reflects the leading role played by China in the changing world. Theme concise, highly malleable, would nowadays complex social issues series. 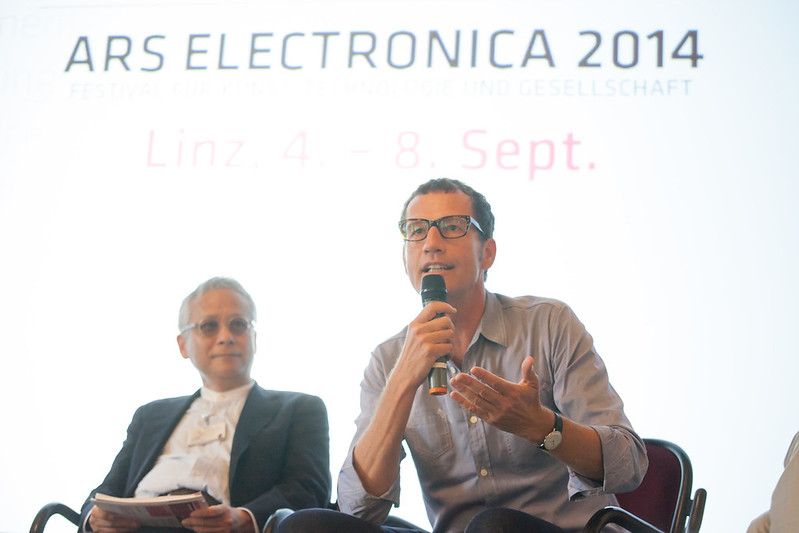 This year the festival as a whole trunk blocks the activity remained unchanged, but a few English infinitive structure to explore, to the public, to play, to show, to think, to celebrate the one and themes “to change” rhyme, Second, to make the festival will classify the different points of interest of the audience, which will help clear experience. Display unit is of course the main event, including Art Awards (Cyber Arts) award-winning exhibitions, art instrument (Device Art) Art Center exhibition galleries change (change gallery), campus invited exhibitions, statues on the beach, etc. Exhibition of Taiwan. The award-winning show is still in the public cultural art gallery (Ok museum) held the annual winners of this year’s British animated all future (Future Everything) of “walking city” (walking city), the impact of the 20th century building by the 1960s paradigm works constitute building a humanoid body walking slowly evolving, music to play music from an active BT team freedom farm (Freefarm). Such awards speech said, this movie reflects the direction of the cross several disciplines, including architecture and music, but also represents the skill levels of today’s computer animation. Highly anticipated interactive art prize awarded to good society often prescribed provocative style Italian-American artist Paul (Paulo Cirio), his work “loophole” use of company tax loopholes a complex and thorough strategic financial hacker impromptu performances, touching social and economic issues, as of a few non-device-type winners. If you are interested in Paul, he may wish to search early Transmediale festival in Berlin to take advantage of big data report abuse theme. Another award nominated American artist Jacob (Jacob Tonski) works “from internal balance” (Balance From Within), which make use of NASA instrument used equipment produced a balance does not fall horn sofa, strong sense of dramatic conflict and let the audience stop, wait and see. 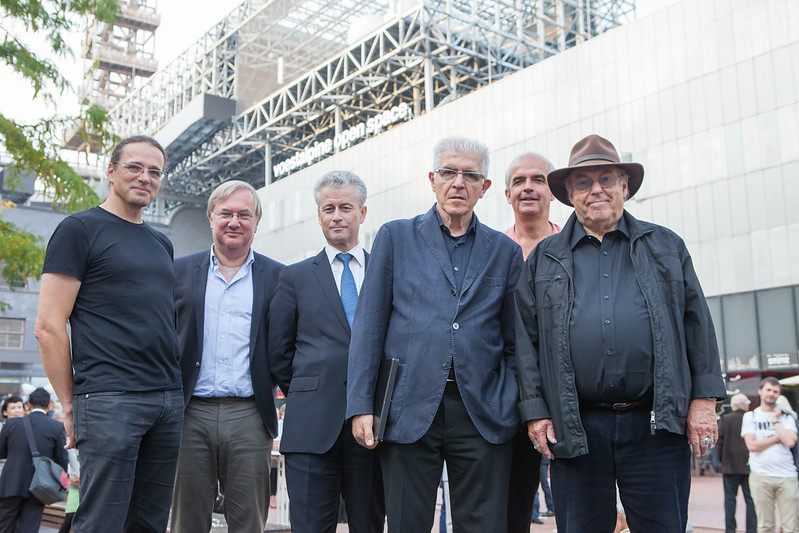 In the selection of Electronic Arts Award (PrixArs), the audience will be surprised to find that this “hybrid art” (hybrid art) and “digital music and sound art” (Digital Musics & Sound Art) two award categories were canceled, the original the new policy, the above two and “interactive art” and “digital community” two year alternating rotation. This year also added a “media art pioneer” award, media arts major compliment an important figure. First Pioneer Award at the remote art, control theory and theories of art wet outstanding contribution eighty-year-old Roy (Roy Ascott). The exhibition at the art award that has his exhibition area, but also the core of his theory of the review. 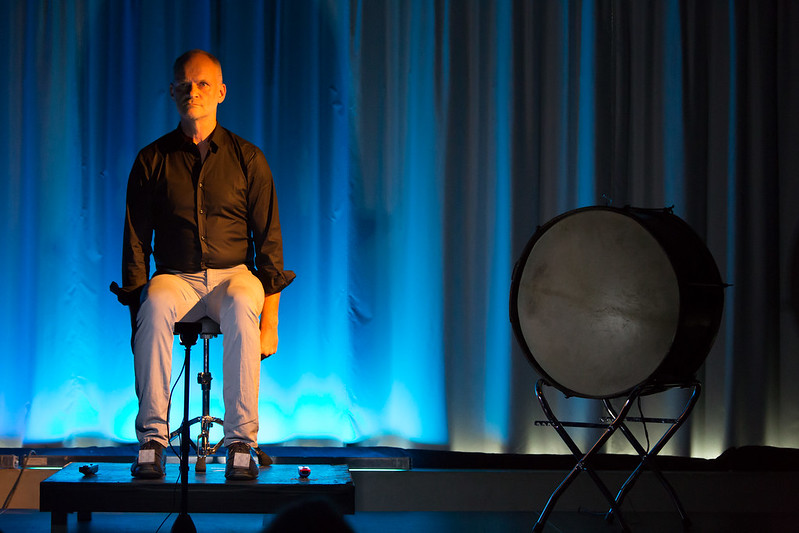 Faced with economic weakness and political rotation, European arts also suffer unavoidable trauma. Last year, the Dutch culture and art from cutting the budget to fund this year’s Ars Electronica Festival plummeted sharply, arts Steering Committee had to accept the cruel fact on the one hand, on the other hand actively preparing for the opportunity to find the change in the face of adversity, in the search for new challenges the configuration, which seek more plasticity to minimize the economic face of the whole art of ecological violations. 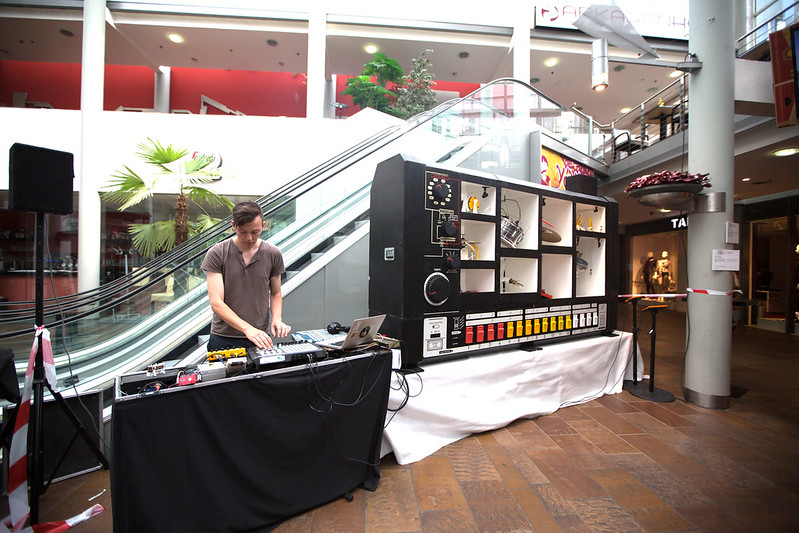 Configuring 1: shopping
The exhibits laying under a Creative mediums and themed or nested within each store downtown shopping center in Linz, is no wall art galleries in the context of the new media sub-round practice. The audience inside the mall walking, occasionally able overjoyed to discover some of the works in the cabinet window. It is worth mentioning that the second floor of the new artists Shi Danfen Austria (Stefan Tiefengraber) two devices, one is to achieve self-destructive device with a hammer by browsing the server, and the other is self-destruction shredders convey information; Japanese artist Liang shore (Ryo Kishi) of “atOms / MoLECULE” floating ping pong sequence the Bernoulli principle of making use of a table tennis dancing flying devices. 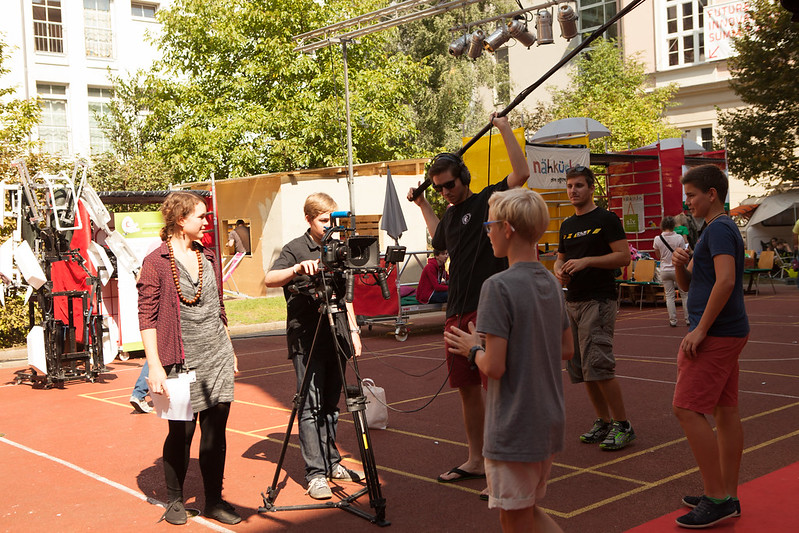 Configuring 2: School
The school also works to move a major highlight of this year’s festival, on the one hand, and only during the festival just coincidence day class, the students will not affect the normal teaching, on the other hand direct docking Festival and the education sector through its Science and art education enlightenment nature to explore future education has also been the most direct manifestation. This is a municipal school, which is located next door to the mall, visiting the festival for the entire line is very convenient terms. Entire high school gang arranged for one large or small hall, playground also be transformed as the awards venue u19 (u19 is for young people under 19 years of age to borrow digital technology to complete their project prototype established awards), and some Carnival outdoor DIY projects educational practice, the main is to undertake various laboratory science electronic Arts Center’s mission, including biological laboratories, rapid prototyping laboratory, audio laboratory and so on. Concern on the playground project also Skeletonics from Japan, pure metal mechanical structure complete live up to the prototype, in 2013 had record passenger market in Tokyo (makerfair) exhibited. Classroom discussions were divided into sections for different blocks, inviting science and technology, culture, education, art innovators were “Future Innovators Summit” (future innovator summit), but also exhibited the Royal College of Art teacher Yuri Suzuki (Yuri Suzuki) work “seemingly Music” (Looks Like Music). 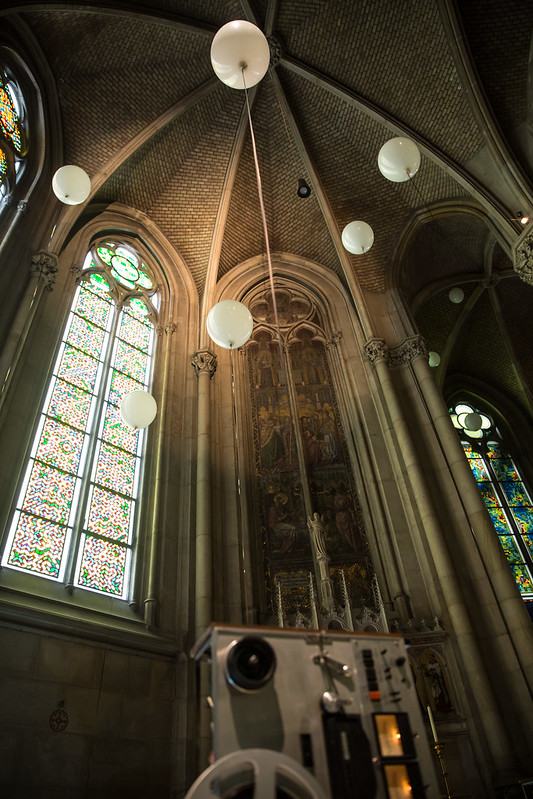 Configuration 3: church
In addition, the church is the great alternative space, a longitudinally extending deep space, three-dimensional range and surrounded by devout audience. As Austria’s largest church and Linz landmarks Marley main church (Marien Dom) is not the first art exhibition to assume responsibility, this year it took on more including architectural projection, public outdoor interactive experience, indoor performances and exhibitions in multi-threaded tasks within the festival. Opening Night of the building projected invited by Thomas (Tomáš Dvořák) and Greg (Dan Gregor) Czech team consisting of the creation of “Archifon III”, plus laser and architectural elements in the traditional facade projection interactive, let architectural projection show real-time sound generation process is triggered. France presented with interactive entertainment for traits designer Antonin (Antonin Fourneau) Shuiguang graffiti on the square, to borrow water capacitive properties, the audience can wanton black wall graffiti, unique. Continuation of the 2013 vertical recorder, the new generation of media artists Japanese English Wada (Ei Wada) has brought a rather poetic “flight recorder” (flying records), connected to the balloon tape player to play with balloons flying up and down along. English Wada also regularly use a mixer to perform his current school is still on display in a classroom in 2010 to participate in the electronic arts festival old work, it is famous for “CRT Jazz” (Braun Tube Jazz Band) .

Can add on the end of “change” in the discussion or controversy? All points of view can be referenced, do summed up the festival.
Configuration four: Awards
PrixArs selection last year when he was surprised to find that mixing art (hybrid art) and digital music and sound art (Digital Musics & Sound Art) two award categories were canceled, the original introduction of the new policy, the above two and interactive art and digital community two alternates yearly rotation. This year added a media art pioneer awards rewarded media art from the candidate an important figure in the development process. First Pioneer Award at the remote art, control theory and theories of art wet outstanding contribution eighty-year-old Roy (Roy Ascott). Has his exhibition area in Cyber Arts exhibition, but also the core of his theory of the review.
Throughout the festival for five days, although Venue yuan, numerous programs, but they tend to exhibit the actual plain, digital visual narrative form, few refreshing works. Some works speculation component is too large, or even loss of business keynote artistic temperament. Did not attract a lot of field devices with the introduction of high-definition display works inevitably disappoint. Missing two main awards arts festival missing provocative sense, controversial works. The depth and extent of academic seminars sharp decrease. Exhibit drastic changes in the configuration, but difficult to find a breakthrough in the true sense. Tight fiscal let the festival has a new bottleneck. Recalling the glorious past at the same time, the festival hopes to deal with internal and external conflicts in the future, taking a big step and find avant-garde art festival hosted.

The art fair was held in the hall of a post not far away from the Hauptbahnhof in Munich. The dom shaped building added a bit feeling of ceremony. 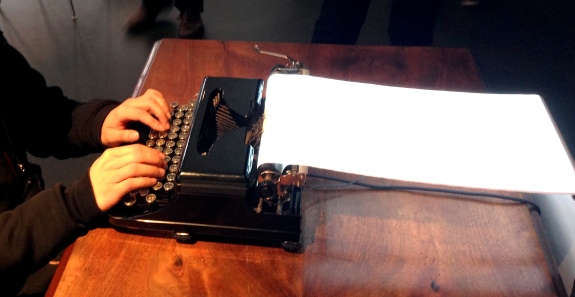 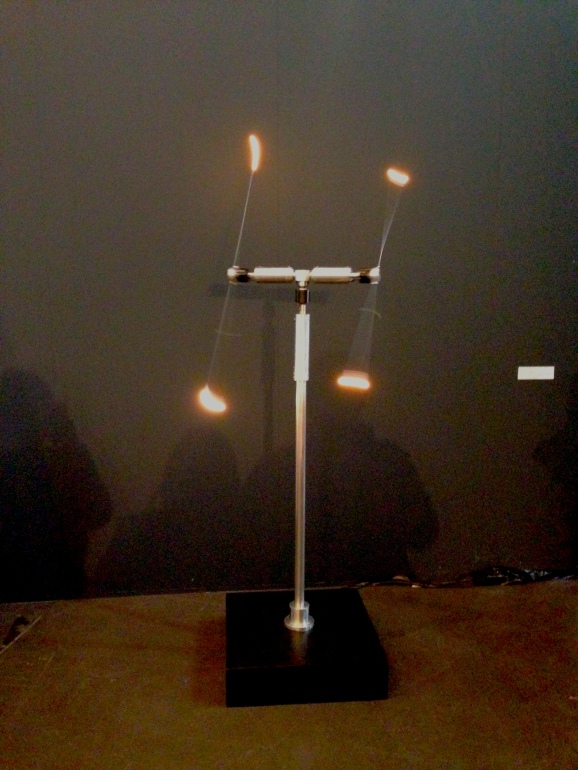 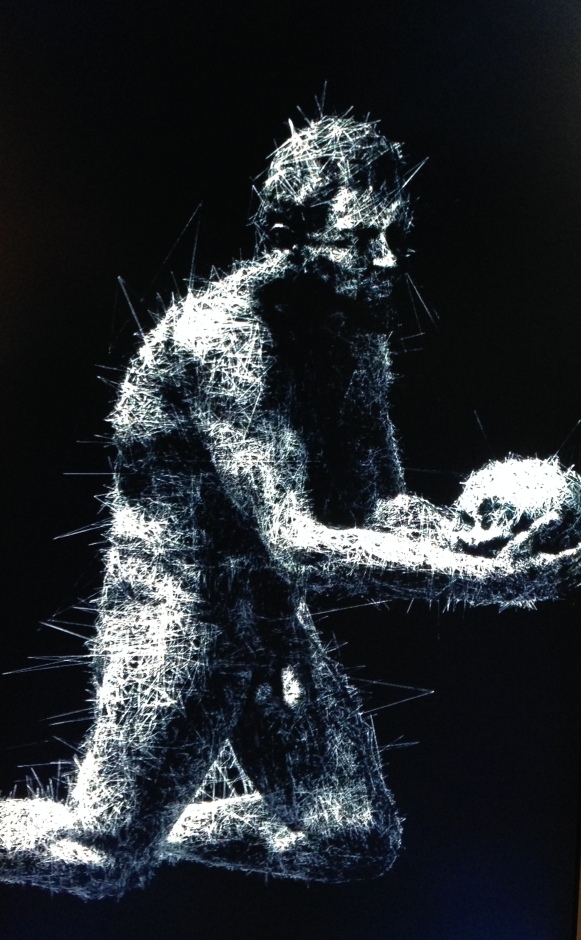 Typical setting in the faire. 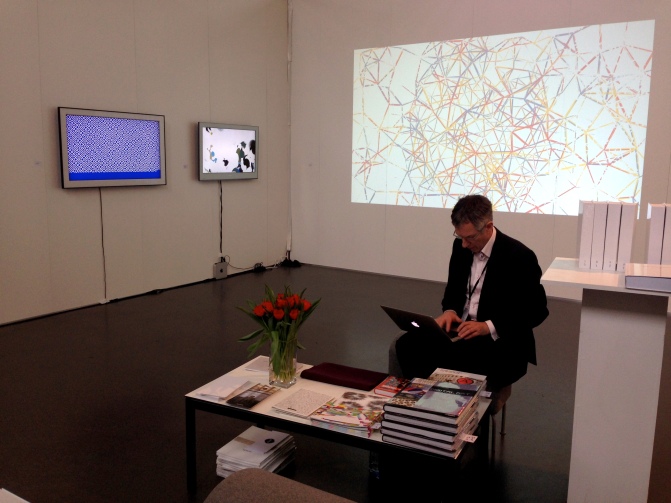 The artwork waiting to be sold are mostly packet very elegantly. 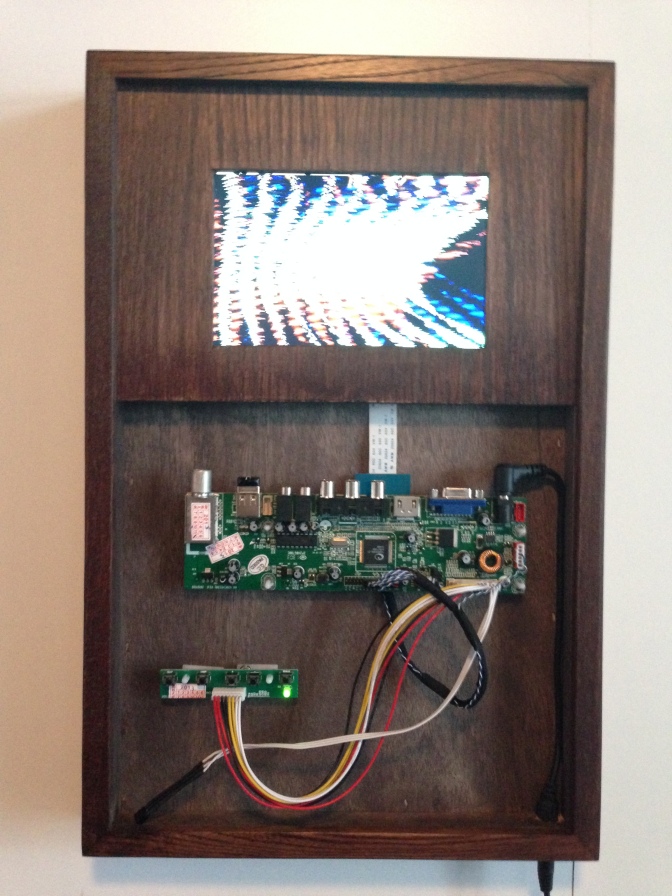 There are a bunch of Chinese artists, who were also presenting their latest works. Among them I found Yuyang WANG’s piece is really impressive. Simple but strong at the same time adding more humanoid factor into the status quo objects. 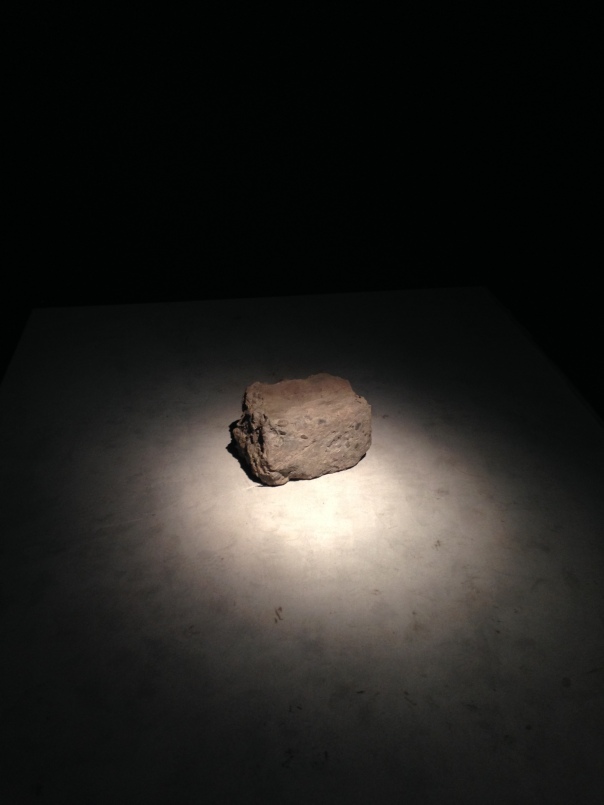 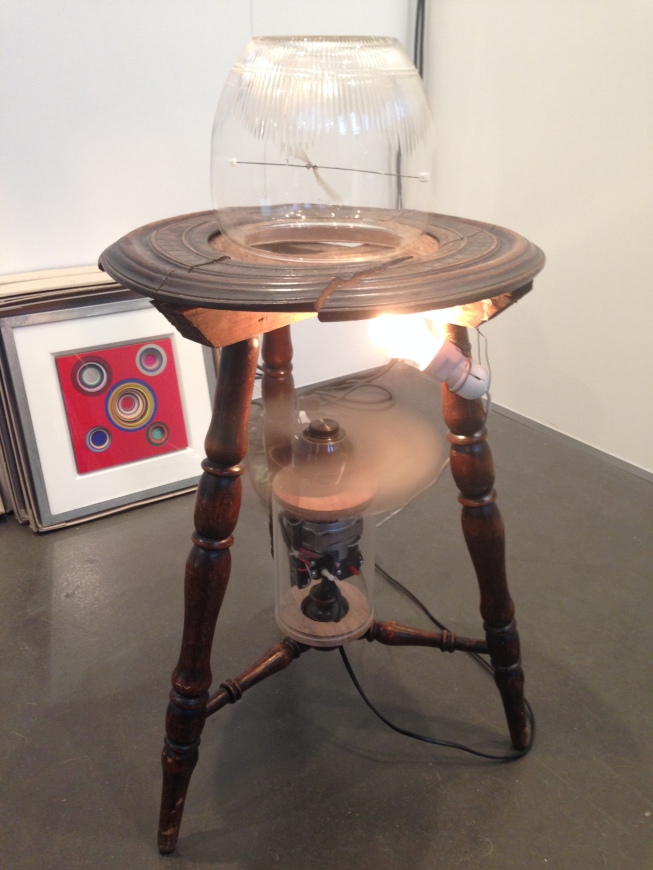 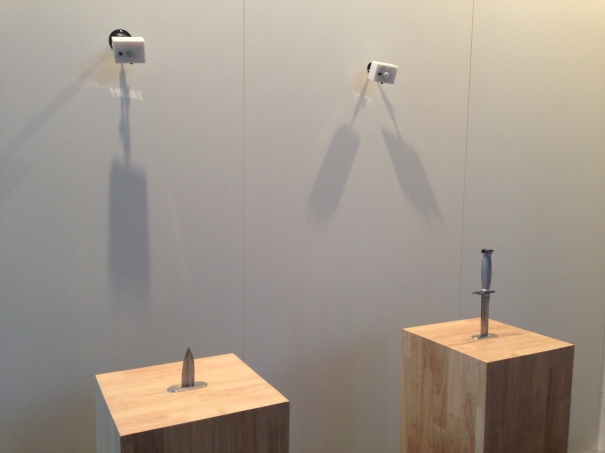